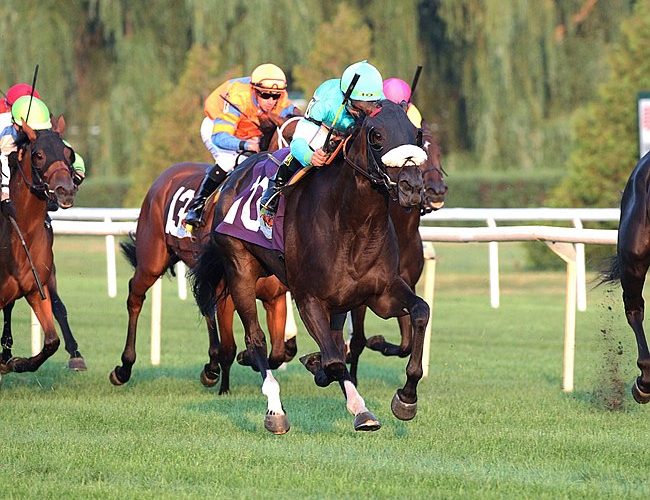 BSW Bloodstock Manager Bradley Weisbord looks for horses with an explosive turn of foot when acquiring stock for his clients. Secret Message showed just that when taking the Grade III Pucker Up in the International Festival of Racing finale on August 11 at Arlington International Racecourse.

Trained by Graham Motion, the 3-year-old daughter of Hat Trick (JPN) sat second to last in the field of twelve and angled seven-wide around the turn to gun down Pamina in the final eighth of a mile. Secret Message was purchased privately by Weisbord on behalf of Sol Kumin’s Madaket Stables following a 1¼-lengths victory in a first level allowance race over the all-weather surface at Turfway Park on March 31. She is owned by Madaket Stables in partnership with ERJ Racing, Elayne Stable 5 and Bouchey Thoroughbred Ventures. She was formerly owned by breeder Allen Tennenbaum, and was conditioned by Brian Michael.

“We liked the race a lot and the fact that she was able to win at a smaller track kept her price more affordable,” Weisbord said. “We put together a small syndication led by Sol Kumin. We moved her to Graham, who is a good friend of mine. The filly came in with an attitude and we thought Fair Hill (Training Center) would fit her well. As you see she broke slow from the gate three out of four times. The race at Churchill was a bang up race. That’s why we gave her seven weeks rather than go to Saratoga.”

The Churchill outing that Weisbord referenced was her start prior to the Pucker Up where she was a troubled fourth in the Grade III Regret Stakes on June 16 behind Beyond Blame, who finished fifth in the Pucker Up.

“(Jockey) Irad (Ortiz, Jr.) said on the plane ride from Louisville that night ‘We never should’ve got beat with this filly,’” Weisbord said. “I thought it was a big effort and why we gave her the proper space into the Pucker Up. She broke with the field which gave her a chance and was able to produce an explosive turn of foot. The similar connections have (Hatoof winner) Colonia who was in line to run here, but we liked Secret Message and thought she could get the job done.”

Secret Message is just one of numerous horses that have allowed BSW Bloodstock to make their presence known at a high level in 2018. Weisbord and his team have been involved in multiple Grade I winners such as A Raving Beauty (GER), Audible, Yoshida (JPN), Monomoy Girl and most notably Triple Crown winner Justify.

“We’re hitting on 49 stakes wins in 2018 already,” Weisbord said. “We have a great team and I want to credit them. My partner Liz Crow inspects horses physically for us and Nicolas De Watrigant (Mandore International Agency) helps us scout our French horses. There are many people that deserve credit here but we all look for horses with explosive turn of foot. We like the grass and the guys that we use like Chad Brown, Christophe Clement, Todd Pletcher, and Graham Motion have all have gotten the job done with us. I also want to credit Sol Kumin who has been involved in most of our deals. He’s a huge part and trusts what we put in front of him.”