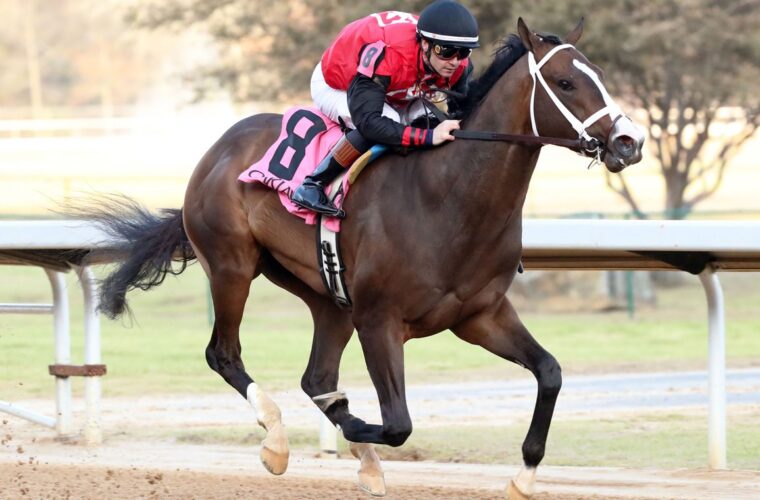 HOT SPRINGS, Ark. – Victory Formation delivered as an odds-on favorite Sunday, when he wired his rivals in the $250,000 Smarty Jones at Oaklawn Park to lift his career record to 3 for 3 and pick up 10 points for the Kentucky Derby.

The one-mile race was the two-turn debut for Victory Formation, a son of Tapwrit owned by Spendthrift Farm and Arkansas resident Frank Fletcher. Flavien Prat came in for the mount for trainer Brad Cox.

“I think he’s a good colt,” Cox said. “Getting him started two turns, I thought Flavien would fit him well.”

Victory Formation won by three lengths over stablemate Angel of Empire, who earned four points for the Kentucky Derby. It was another three lengths back in third to Denington, who picked up three points. Western Ghent was fourth to earn two points and How Did He Do That was fifth and earned one point Sunday.

Victory Formation ($3.20), who at one point was bet down to 1-5 and went off at 3-5, was warmed up well by Prat. When the gate opened, the pair moved toward the lead. Victory Formation crossed over from post 8 in the field of eight and was in control of the race on the first turn as Western Ghent settled into a tracking position.

Victory Formation proceeded to set fractions of 23.20 seconds for the opening quarter, 47.75 for the half-mile and 1:12.36 for six furlongs, with the race ending at the sixteenth pole. Victory Formation covered the distance on a fast track in 1:38.14, on a beautiful afternoon for racing with clear skies and temperatures in the high 60s.

Victory Formation shipped in from Fair Grounds for the race, which was the first Kentucky Derby qualifier of 2023 and the first of four points races at Oaklawn. He had won a maiden special weight at Keeneland and a first-level allowance at Churchill Downs.

“He’s pretty smart,” Cox said. “Last time he was drawn down toward the inside and there was speed on the outside and he was kind of asked for some early run. He’s able to go 21 and change. I was a little concerned. He was passed down the lane and fought back and the jock came back and said he’ll be a better horse around two turns, so here we are.”

Victory Formation has now earned $282,285. He’s one of six horses Cox has among the top 15 points earners for the Kentucky Derby through Sunday. The leader for the barn is Jace’s Road with 13, followed by Instant Coffee with 12 and Victory Formation with 10, according to the latest rankings put out by Churchill Downs.

Cox has a division of horses at Oaklawn, which continues its 3-year-old series with the Southwest, Rebel and Arkansas Derby.