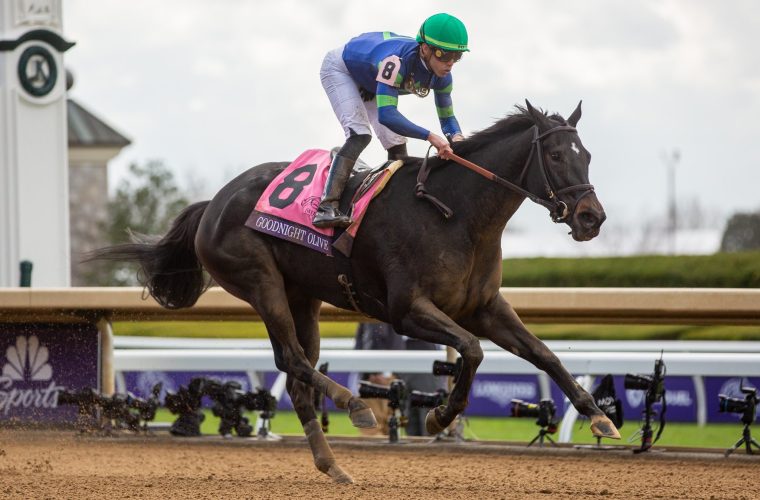 Patience lies at the center of Chad Brown’s operation—an attribute of his stable that has paid off over the years and especially at Keeneland Nov. 5 with Breeders’ Cup Filly & Mare Sprint (G1) winner Goodnight Olive .

“A couple of different times she’s had to stop, and she doesn’t run often, but when she does run, she lets everybody know she’s there,” Brown said.

Blustery Kentucky skies framed the scene as the 12-horse field took to the paddock, all looking for an opportunity to earn a spot in Breeders’ Cup World Championships history.

With tension palpable in the warm autumn air, the horses loaded into the gate to kick of the second day of racing with Bo Hirsch’s homebred Ce Ce  attempting to retain her 2021 title earned at Del Mar.

Rocketing out first was New Mexico-bred Slammed , who was leaving from post No. 1 for the first time in her career. She led down the rail with Edgeway  and Lady Rocket  following closely behind in :22.10 and :44.89.

As the pace carried on, Goodnight Olive and jockey Irad Ortiz Jr., who had run comfortably in fifth, moved swiftly to the lead, heading into the stretch in 1:08.92 with Echo Zulu running a close second and Wicked Halo moving up into third.

With the wire nearing, it was evident there would be no catching Goodnight Olive who continued to quicken, passing the wire 2 1/2 lengths ahead in a final time of 1:21.61.

“She normally breaks pretty well in her races, and Irad knows her really well to give her a good warm-up,” Brown said. “She really worked out the trip. We thought there’d be three or four horses just ahead of her, and we wanted to be close.

“(I’m) so pleased with her race and appreciative of the owners and their patience. There’s been more bad phone calls than good ones with this horse, I can promise you that.”

Steve Laymon of First Row Partners says Brown is the key to his success, mentioning Laymon’s last trip to the world stage where the trainer led Dayatthespa  to victory in the Breeders’ Cup Filly & Mare Turf (G1T).

“I was fortunate enough to be with Chad at the very end of his days with (Bobby) Frankel. I was lucky enough to win a Breeders’ Cup race with Dayatthespa in 2014. One common thread between Goodnight Olive and Dayatthespa is this guy next to me. Special, special, trainer. He has a target and he’ll find it. This was our plan probably too long ago,” Laymon said.

Laymon recalled being at Saratoga Race Course when Jay Hanley of Team Hanley said they should partner on some horses.

“I brought two groups together—there’s six of us that make up First Row Partners,” Laymon said. “I have partners from California, Montana, but Saratoga is our common ground. I have such a wonderful group of guys.”

Both Laymon and Hanley sang praises for Brown’s training style, especially in the case of Goodnight Olive who has had several issues throughout her short career. Her last start ahead of the Breeders’ Cup was a win in the Ballerina Handicap (G1) at the Spa in late August.

The 4-year-old daughter of Ghostzapper  ‘s only loss came in her debut, a maiden special weight race at Gulfstream Park in March 2021. The Ballerina was her first attempt in stakes company.

“When she started off her career, she came in a disappointing second, her only loss. She came here (Keeneland), broke her maiden, and then rolled off six wins in a row,” Hanley said. “Her last race, the Ballerina, obviously a grade 1, Chad had the confidence to put her in there.

“The race before that was at Saratoga…Chad and his staff have masterfully handled this filly since day one. To get her to those allowance races, to get her here, and obviously training out of the Ballerina. All thanks to Chad and his staff for getting her here and to give a nod to the breeders, Stonestreet, and (bloodstock agent) Liz Crow who helped Steve and me pick this horse out ”

Crow purchased the Stonestreet-bred filly for First Row Partners for $170,000 from the Summerfield consignment to the 2019 Fasig-Tipton Kentucky Fall Yearling Sale

Brown gave appreciation right back to the filly’s owners and thanked them for allowing him to make decisions and trusting him to make all the right moves. He said that the Ballerina was the perfect setup for a start in the Breeders’ Cup and that if she could run a similar race, she could have it in the bag.

“That was a very strong race and I didn’t think it would take any more to win this race…especially with a horse that’s proven to be fragile,” Brown said.

Despite coming in off of a strong win, Laymon says he is delighted to have beat a field of top-notch horses and that he could not ask for any better from the filly.

“Look at the two champions who ran that the filly beat today. One of my partners counted 18 total stakes wins for those horses. It’s just amazing to see how accomplished she’s become in such a short time,” Laymon said with a smile.

The candor ended with a pertinent question posed for all three; what is next for the filly?

“She’s not for sale,” said Hanley with a chuckle.

“In fact, I just saw my insurance agent: I think I have to make a call,” concluded Laymon.