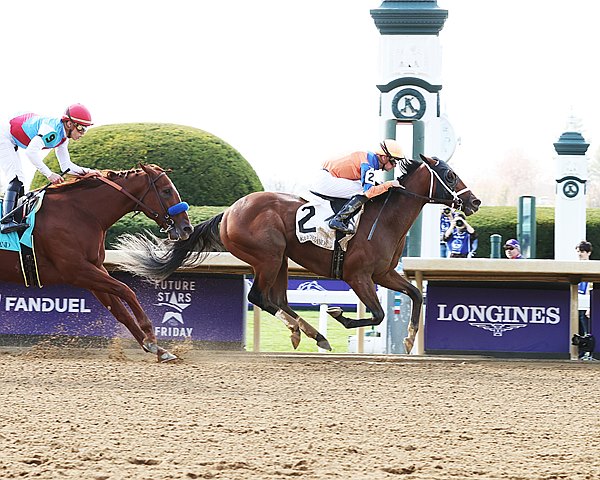 Giant Mischief (Into Mischief) was a bit under the radar here at 6-1 after overcoming a fair bit of adversity to win on debut at Horseshoe Indianpolis Sept. 22, but he assured that won’t be the case next out with an impressive score over ‘TDN Rising Star’ Arabian Lion (Justify) in a Keeneland optional claimer Friday, earning his own ‘Rising Star’ nod.

The $475,000 KEESEP buy, carrying the Spendthrift colors for this second start, put himself into the early mix from his low draw and stalked from second through a snappy :22.35 opening quarter. Favored Arabian Lion, who bobbled for a stride or two not long after the start, launched the first attack on the pacesetter, moving up outside of Giant Mischief to confront the leader as the half went in :45.84. That foe surrendered quickly and it was a three-wide Arabian Lion and the rail-skimming Giant Mischief turning for home together. Arabian Lion hit the front with such a head of steam that it looked like he’d blow the doors off his foe, but Giant Mischief refused to yield, and the pair battled down the length of the stretch, with Giant Mischief maintaining a narrow advantage to the wire. Arabian Lion was a gallant second after covering 25 feet (about 2 3/4 lengths) more than the winner. It was another 17 1/2 lengths back to Laurel debut victor Old Alliance (Hard Spun) in third.

The 36th ‘TDN Rising Star’ for Into Mischief, Giant Mischief is out of the MGSW mare Vertical Oak, who herself brought $700,000 out of the Fasig-Tipton Fall Mixed Sale by Stonestreet Thoroughbreds carrying the winner in utero. Vertical Oak, who was trained by Steve Asmussen, is a daughter of Vertical Vision–also conditioned by the Hall of Famer–who was the first stakes winner for her sire back in 2009. Vertical Oak has since produced a weanling filly by Curlin and visited Quality Road for the 2023 season.