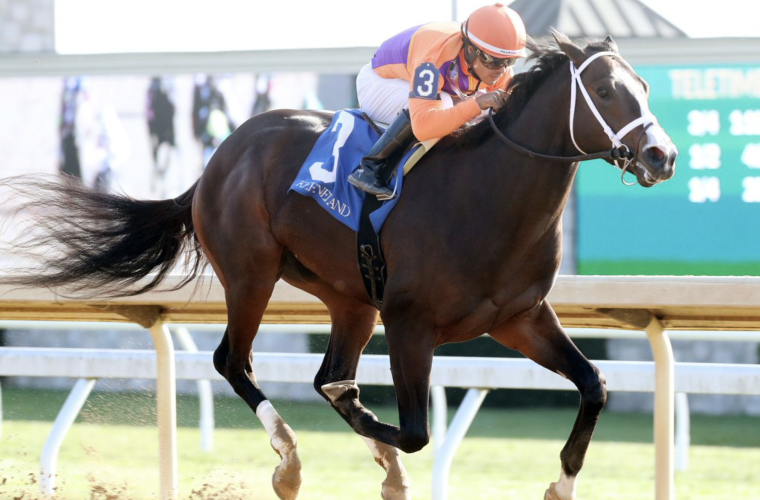 Sent away at a well-backed 7-2 in arguably the toughest and deepest 2-year-old maiden of the fall meet at Keeneland Friday afternoon, Spendthrift Farm and Frank Fletcher Racing Operation’s Victory Formation (c, 2, Tapwrit–Smart N Soft, by Smart Strike) led past every pole to become the 10th individual winner and the first ‘TDN Rising Star’ for his Gainesway-based freshman sire (by Tapit).

Hustled away from gate three by Luis Saez, Victory Formation headed off his rivals as the field linked up with the track proper and got the opening quarter in a solid :23.03 while chased to his inside by favored Communication Memo (Bolt d’Oro) and by Release Mccraken (McCraken) deeper out. Galloping in hand on the turn, the athletic bay pinched a break when asked to lengthen entering the stretch and kicked readily clear through the final eighth of a mile to take it by a space. Release Mccraken was second ahead of Communication Memo.

Weyhill Road (Quality Road), the well-related $1.6-million Keeneland September graduate, was headstrong and checked in traffic down the backstretch, came with an inside run on the turn and flattened out a bit in the final furlong to finish fourth in an effort that can certainly be built upon. Baseline Beater (Flatter) was bothered badly by Schoolmaster (Ger) (Helmet {Aus}) soon after the break, but closed his final quarter in a race-fastest :24.65 to check in a promising fifth.

Gainesway, who stands Classic winner Tapwrit alongside his own extraordinary sire, purchased the winner’s dam for $140,000 in foal to Uncle Mo at the 2015 Keeneland November Sale and elected to retain the mare when offered carrying the colt that would become Victory Formation on a bid of $47,000 at KEENOV in 2019.

A half-brother to recent GI Rodeo Drive S. third Bellamore (Empire Maker, $184,840), Victory Formation is a grandson of late James Tafel’s GSW Softly, while the deeper female family includes GSW/MGISP Til Forbid (Temperence Hill) and her Grade III-winning daughter Scoop (Gone West). Smart N Soft is the dam of a yearling Karakontie (Jpn) filly that was purchased by RGS Enterprises for $130,000 at last month’s Keeneland September Sale and a weanling filly by Practical Joke. She was most recently covered by Raging Bull (Fr).