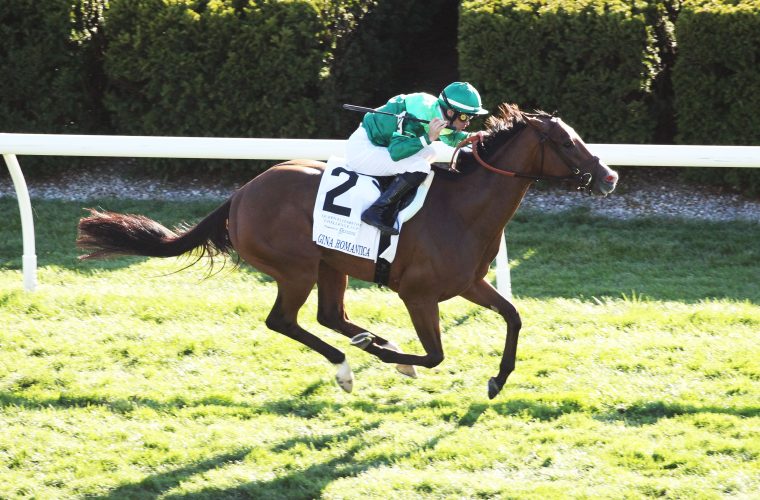 Trainer Chad Brown and owner Peter Brant were represented by the 1-2 finishers in last week’s GI First Lady S. at Keeneland, and were right back at it again in Lexington Saturday as Gina Romantica (Into Mischief) scored a breakthrough win in the GI Queen Elizabeth II Challenge Cup S. Presented by Dixiana. The $1,025,000 KEESEP yearling was the only runner in the race carrying Brant’s silks, but Brown completed the exacta himself with Klaravich Stables, Inc.’s odds-on GISW McKulick (GB) (Frankel {GB}). It was a record fifth win for Brown in the race named for the U.K.’s recently departed monarch. California invader Bellabel (Ire) (Belardo {Ire}) completed the trifecta.

Fastest from the blocks, Gina Romantica was taken back a bit by Flavien Prat to sit fourth in the field of six as last-out Irish Group 3 winner Paris Peacock (Ire) (Muharaar {GB}) had designs on making the lead. She snuck inside of McKulick and into the pocket down the backside, and remained in that spot through a half in :48.22 and six furlongs in 1:12.83. It briefly looked like Gina Romantica could run into traffic trouble as her stablemate took the overland route, but a seam opened behind the fading Paris Peacock and Bellabel in midstretch and Gina Romantica charged through it before pulling away decisively.

A fast-finishing debut winner sprinting on the Tampa main track in March, Gina Romantica was a well-beaten sixth when wading into much tougher waters for this venue’s GIII Beaumont S. a month later. She took a rained-off and sloppy first-level allowance in her first route try at Belmont in May, and remained on the dirt to be fourth in Saratoga’s restricted Wilton S. July 14. The bay was a rare $30 turf winner for Brown when she upended the Riskaverse S. (also restricted) back at the Spa Aug. 25, and was most recently second at much shorter odds in BAQ’s GIII Pebbles S. Sept. 18. The Brown barn sent out the top three that day–the winner was another Klaravich colorbearer, while the third finisher carried Brant greens.

“Getting her out there in distance a little more, and she has more experience on the turf,” said Brown when asked for the reasons behind Gina Romantica’s incremental improvement. “She caught a clean break and I thought Flavien rode a terrific race. She proved she can get the extra distance and step up with top-class fillies.”

He added, “I want to thank Liz Crow and her team for picking the horse out. She was born and raised locally, right here in Lexington at Machmer Hall, and she’s a Keeneland [sales] graduate. We’ve had so many great horses that we bought here. [Of our] five Queen Elizabeth [wins], this is probably the most memorable, obviously, with the recent passing of The Queen. What an honor even to participate in the race, but to have such success in it–we’re just really lucky to work with these horses.”

Special Me (Unbridled’s Song), who now has four graded winners to her tally, including Gina Romantica and additional GISW and Lane’s End’s first-crop weanling sire Gift Box (Twirling Candy), has been a truly special mare for Carrie and Craig Brogden’s Machmer Hall (see The Bargain of a Lifetime and a related video, by Christie DeBernardis). Special Me slipped what would have been a 2020 foal by Quality Road and her 2021 foal by Curlin died, but she has a Feb. 26 weanling colt by Into Mischief–a full-brother to Gina Romantica–and was bred back to Twirling Candy for a full-sibling to Gift Box. Almost unbelievably, Machmer Hall picked up Special Me for $6,000 at the 2009 Keeneland January sale. The price of her offspring has steadily increased with her success, with Gina Romantica being the most recent to sell, bringing $1.025 million as a Keeneland September yearling from BSW/Crow.

Over the years, the Brogdens have publically expressed their long affinity for Unbridled’s Song mares and it’s hard to argue with a record of 214 black-type winners out of his daughters. Gina Romantica is one of four stakes winners out of an Unbridled’s Song mare by Into Mischief, while another three (including champion Covfefe) are by his sire. Into Mischief, who is on track for his fourth general championship in North America, has 115 Northern Hemisphere-foaled black-type winners, including 23 thus far in 2022. Among his 55 graded winners are additional 2022 GISWs Life Is Good and Wonder Wheel, both pointing to the Breeders’ Cup.