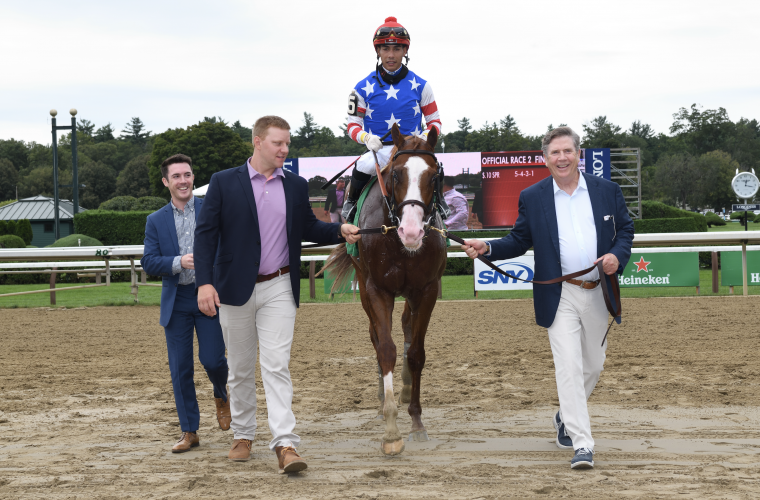 Owner Jim Bakke’s experience in horse racing has been fairly typical. He started off with a small stable, didn’t have much success and waited for his day to come. It looks like he’s not going to have to wait any longer.

Along with Gerald Isbister, Bakke is the co-owner of ‘TDN Rising Star’ Jack Christopher (Munnings), a Chad Brown-trained colt who brought down the house Saturday with an 8 3/4-length maiden win at Saratoga. Jack Christopher, who is named for Bakke’s six-month-old grandson, will head to the GI Champagne S., which could be a springboard to the GI Breeders’ Cup Juvenile. Bakke is also the owner of Girl With a Dream (Practical Joke). She broke her maiden impressively on July 24 at Ellis Park and will make her next start in Sunday’s GI Spinaway S. for trainer Brad Cox. The hope is that she will earn her way to the GI Breeders’ Cup Juvenile Fillies.

Bakke is the president and CEO of Sub-Zero, a luxury refrigeration company based in Madison, Wisconsin that has been in the Bakke family since 1945. A longtime racing fan who attended many a running of the GI Kentucky Derby, he decided to get involved in ownership in the late nineties, but did so on a small scale.

“I started out really small with my brother-in-law, Fred Schwartz,” Bakke explained. “He’s the one who introduced me to ownership back then. We had been going to the Derby forever and then we decided to buy some horses about 1998, 1999. We were buying just one or two a year, very modest horses. They were all claimers.”

Mr. Freeze, a $75,000 Keeneland September purchase, was part of a plan. Bakke was ready to spend a bit more on horses, building up quantity and quality. Mr Freeze is also co-owned by Isbsiter, who is a distributor for Sub-Zero.

“This has been about my love of the game,” he said. “I was hoping to have a little more luck and the way you do that in horse racing is to increase your numbers, the amount of horses you buy every year and who you have buying them for you.”

Bloodstock advisor Bradley Weisbord signed on to work for Bakke and was told to go find more horses like Mr Freeze.

“I have picked really great partners,” said Bakke, whose stable at this time of year usually numbers from 10 to 12. “Chad Brown is the trainer of Jack Christopher and Bradley Weisbord and his team did a tremendous job finding Jack Christopher.”

Bakke said he offers little, if any, input on picking out the horses, but there is a budget. Liz Crow chose Jack Christopher for $135,000 at the Fasig-Tipton Kentucky Fall yearling sale, and Girl With a Dream for $115,000 at Keeneland September. That’s his price range.

“Potentially, I could buy more expensive horses,” he said. “Over the years, I have bought a few in the 300 to 350 range. But when those horses don’t turn out so well, it hurts. Buying them where I’m at right now, if they don’t work out we can reload and try again. I have had tremendous luck buying horses in that price range, starting with Mr. Freeze, who I got for $75,000. If you employ people who know what they are looking for and are good at it, I think you can buy a little bit down market and be successful. Let’s face it, you need a lot of luck in this game. And even if you do have a successful horse, keeping them sound is another issue. They are so fragile. When you start buying in those upper-price ranges and if your horse doesn’t do well or does well and gets hurt, that’s just a big bite out of you.”

Bakke is so hands off that he never once spoke to Brown prior to Jack Christopher’s debut.

“I think they also appreciate that I don’t micro-manage things,” he said. “I don’t call them up and ask them how a horse is doing even on a weekly basis. I might call them before a big race or every once in a while. But I don’t keep track of the horses on a daily basis. I still have my job back in Madison, so I’ve got plenty to do on a daily basis.”

Yet, he knew the colt had potential.

“It’s great to have these kind of quality 2-year-olds,” he said. “Once in a while, I’ve hit on a few, but probably nothing like this. Both of them will be running in Grade I’s over the next 30 days. We’ll see where it goes. It’s been a great ride and I’m looking forward to the ride continuing in the future.”