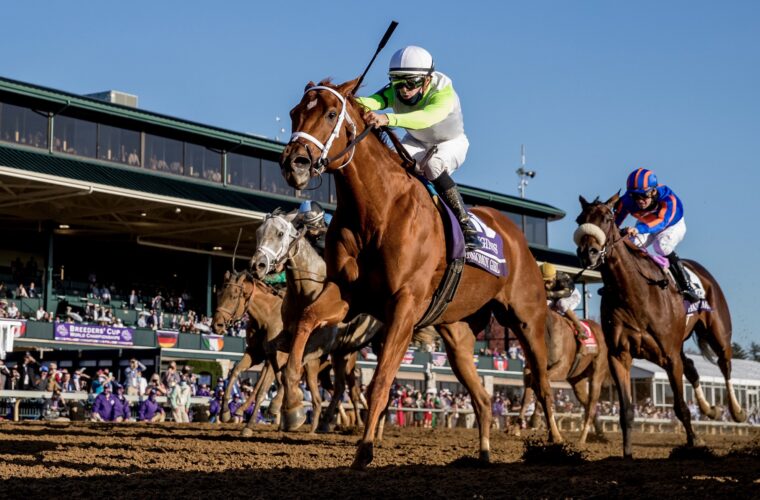 In what has been a bizarre year, Breeders’ Cup weekend signified the highs of the highs this game has to offer, with four winners coming in during a weekend which will be tough to top.

Breeders’ Cup weekend kicked off on Friday with Breeders’ Cup Juvenile Fillies Turf where Aunt Pearl (IRE) took the field gate to wire in a dominant performance, likely making her a finalist for Champion Two Year Old Filly for owners Madaket Stables, Michael Dubb, Michael Kisber, Peter Deutsch and The Elkstone Group. Coming into the race a perfect two for two for, the talented daughter of Lope de Vega shook loose going into the first turn before opening up several lengths down the backstretch, creating what turned out to be an insurmountable lead. Purchased as a yearling on our initial foray to Tattersalls, she now heads to Florid for a 60 day break before returning for her three-year-old campaign.

Future Hall of Famer Monomoy Girl put a cherry on top of her amazing comeback season, taking the G1 Breeders’ Cup Distaff for the second time for owners Monomoy Stables, Michael Dubb, The Elkstone Group and Bethlehem Stables. With everything stacked against her, between the year and a half off as well as her outside post position in this race, Monomoy Girl lost ground every step of the way in this race, but that never mattered to her, coming home 1 3/4 lengths in front of Valiance. Monomoy Girl shipped to Fasig-Tipton the next morning before selling for $9.5 million to Spendthrift, a record for a Racing/Broodmare Prospect.

Kentucky Derby winner Authentic took the field gate to wire in the Breeders’ Cup Classic, likely cementing his favoritism to earn the Eclipse Award as Horse of the Year as well as Champion Three Year Old Colt for owners Spendthrift Farm, My Racehorse, Madaket Stables and Starlight Racing. The win marked the final race of Authentic’s young career as he retires to Spendthrift Farm after an outstanding season which saw him earn nearly $6.2 million.

Whitmore, who had run 2nd and 3rd in prior editions of the G1 Breeders’ Cup Sprint, finally notched his much deserved Breeders’ Cup win, blitzing the field in the stretch to win by a widening 3 1/4 lengths. The seven-year-old gelding has been one of racing’s mainstays for several seasons now for owners Robert La Penta, Southern Springs Stables and Head of Plains Partners, with this win marking his 15th in 38 starts and earnings of $4,247,850.