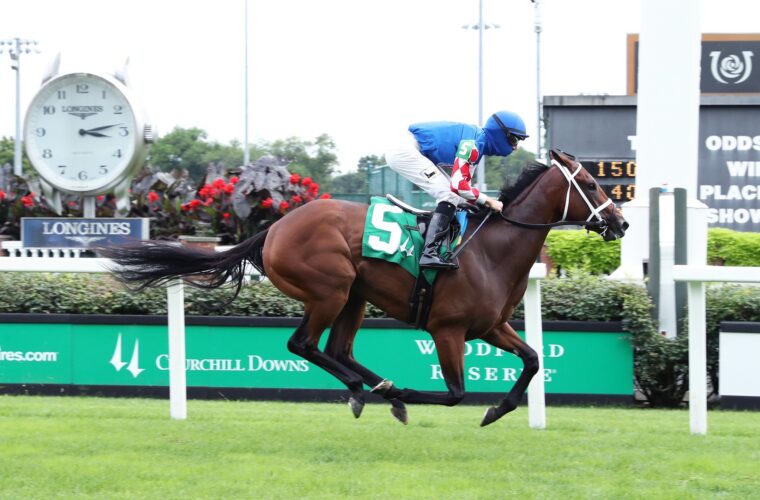 Aunt Pearl (Ire) (Lope de Vega {Ire}) went straight to the lead and never looked back, coasting home to become the newest ‘TDN Rising Star’ on opening day of Churchill Downs’ abbreviated GI Kentucky Derby meet. Dispatched as the 9-5 second-choice in this career bow, the 280,000gns TATOCT purchase seized the early advantage, coasting along through opening splits of :24.27 and :48.21. Turning for home in front, the bay sailed clear with ease under a hand ride from Florent Geroux to win by five lengths. Gam’s Mission (Noble Mission {GB}) was best of the rest in second.

The filly was part of a European venture put together by BSW/Crow Bloodstock’s Brad Weisbord and Liz Crow. She was one of nine fillies purchased for this group of five American owners. 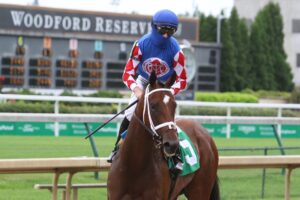 “We put together a venture last year to go over to Tattersalls to buy yearling fillies,” Weisbord said. “The thought process was that 50% of our high-dollar races were on turf and [Europe] has the best pedigrees on turf, so why try to play it with the American pedigrees when we can get the European pedigrees. The pioneers were Chad Brown, Seth Klarman and Peter Brant in the fact that they already had a champion out of there and it was working. So, we kind of played copy cat in a way. We bought nine fillies and we dispersed them amongst four different trainers. This was our ventures third runner and first winner. The last month, she trained like the best one of the first five we sent out. She trained like a special filly the last three or four weeks, but all on the dirt. We didn’t know what she would do on the turf, but she is bred for it. She ran to our expectations and I would like to give the five owners credit for putting trust in our venture.” 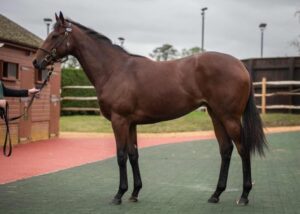 “We went over with the idea to buy nine or 10 horses and she was the most expensive filly we bought,” said Crow, who picked out the filly at Tattersalls. “She just had a really American look to her. She had a really good hind leg, a really strong forearm and good muscling. She looked like she could train really well on the dirt here and she has been breezing very well on the dirt every week, so we were expecting a big effort out of her.”