Eight Rings Cuts Back For Return in Bachelor Stakes 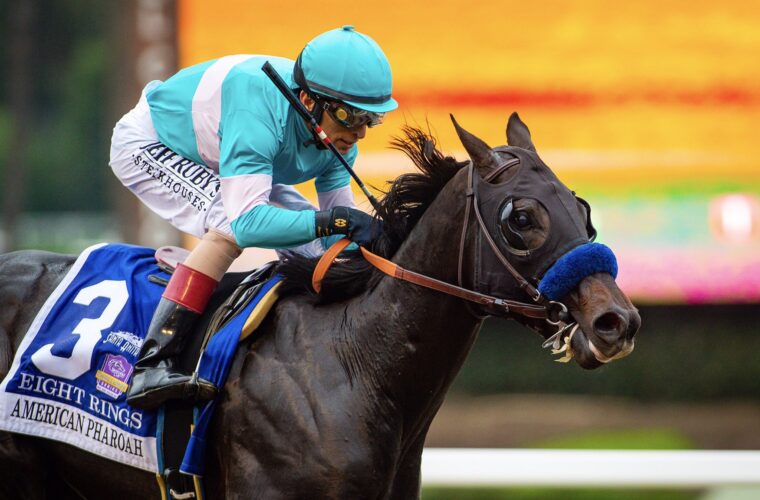 Eight Rings, one of the top 2-year-olds in the country last year, makes his 2020 debut Saturday at Oaklawn Park in the $100,000 Bachelor Stakes, a six-furlong race for 3-year-olds that drew eight others.

This will be the shortest distance at which Eight Rings has competed since a debut win going 5 1/2 furlongs last summer at Del Mar. He got a Beyer Speed Figure of 94, an outstanding number for a 2-year-old in August.

Eight Rings had an eventful time in three subsequent starts. He took out Storm the Court when making a beeline for the rail in the Del Mar Futurity, rebounded from that to win the Grade 1 American Pharoah, then faded to sixth of eight in the Breeders’ Cup Juvenile.

He hasn’t raced since.

Eight Rings was originally targeted for the Los Alamitos Futurity in December, but after working three times following the Breeders’ Cup he was given a two-month rest and did not return to the work tab until February. He worked eight times at Santa Anita before heading to Oaklawn, where on April 17 he flew five furlongs from the gate in 59 seconds, the fastest drill at the distance that morning and his fourth bullet drill out of his last six moves.

“He’s doing really well,” said his trainer, Bob Baffert. “I’m running him short because I didn’t want to bring him back going a mile and an eighth.”

The options were few for Eight Rings once racing was suspended at Santa Anita. The Bachelor offers a suitable comeback spot for a colt who showed he could sprint and run well fresh last summer.

It also should move him toward potentially bigger assignments in the coming months. Along with Maxfield, last year’s Breeders’ Futurity winner who has yet to start in 2020, Eight Rings is one of the higher-profile horses who will appreciate the Kentucky Derby being delayed until September. There’s no way he would have been ready for a May 2 Derby.

“He’ll benefit by it,” Baffert said.

Joel Rosario takes over for the first time on Eight Rings.

The Bachelor will not be an easy assignment for Eight Rings. He has to contend with the razor-sharp Long Weekend, who has won both his starts this year and crushed Bachelor rivals Little Menace, Lykan, and Beau Oxy in the March 21 Gazebo with a Beyer Figure of 95, tops among this field.