A couple of BSW private purchases will make their 2020 debuts this weekend, one of which was acquired days after the other had been born.

Whitmore, a BSW private purchase in the spring of his four-year-old year on behalf of Head of Plains Partners, joining original owners Robert LaPenta and Southern Springs Stables, will begin his 2020 campaign in the King Cotton tomorrow at Oaklawn Park, a track where he has won seven races. When last seen sprinting, Whitmore was charging down the middle of the track to run a good 3rd in the G1 Breeders’ Cup Sprint over a track that was not conducive to closers.

Newly turned three-year-old Comical will begin her campaign as the morning line favorite in the Suncoast Stakes at Tampa Bay Downs tomorrow, after a strong two year old campaign which saw her take down the G3 Schuylerville at Saratoga before G1 placings in the Del Mar Debutante and Chandelier. Privately purchased in June of last year on behalf of Madaket Stables, Comical will be making her first start for a new partnership tomorrow as WinStar Farm and Lindy Farms have joined the ownership group. 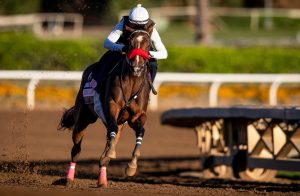