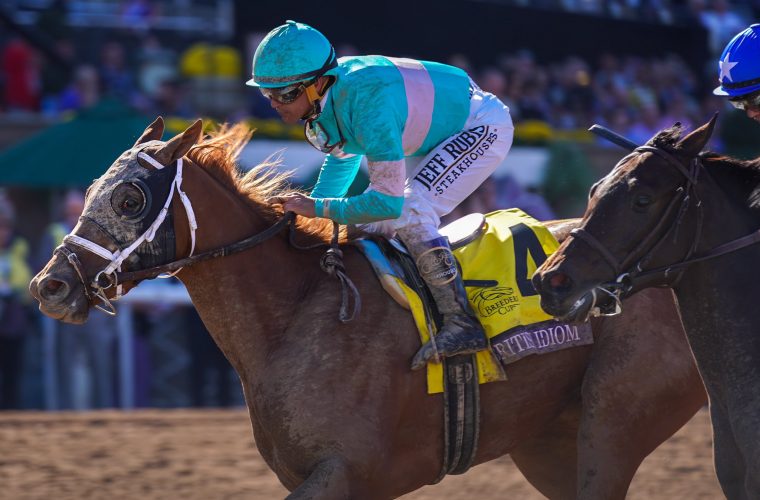 Article originally written by Marcus Hersh of DRF.com on February 3, 2020.

British Idiom was timed in 1:01.80, a full second slower than her work the week before, but a more than satisfactory morning showing.

“Not as fast this week, but she worked really, really good,” trainer Brad Cox said. “She’ll do something easier next Sunday and then that’s it.”

British Idiom, regardless of what she does in 2020, already has outrun her pedigree and purchase price. She was purchased as a yearling for just $40,000, though other owners have since signed on and British Idiom now is campaigned by a partnership of prominent owners.

The filly is by Flashback, whose first foals raced in 2018, and is his top-earning progeny by about $1.2 million. Only two other horses by Flashback have earned even six figures, while British Idiom banked more than $1.3 million in 2019 following a Saratoga debut win and victories in the Grade 1 Alcibiades at Keeneland and Breeders’ Cup Juvenile Fillies. British Idiom was produced by the mare Rose and Shine, who is by Mr. Sekiguchi. Her two other foals to race both are winners, including stakes winner Parade of Roses.

Also galloping forwardly is the 2018 3-year-old filly champion, Monomoy Girl, who hasn’t started since winning the 2018 Breeders’ Cup Distaff. Monomoy Girl got back into training on a couple occasions during 2019 but never came close to making a race. Cox said all has gone well with her since she returned from a Florida farm in late December and, so far, this comeback is going along straightforwardly.