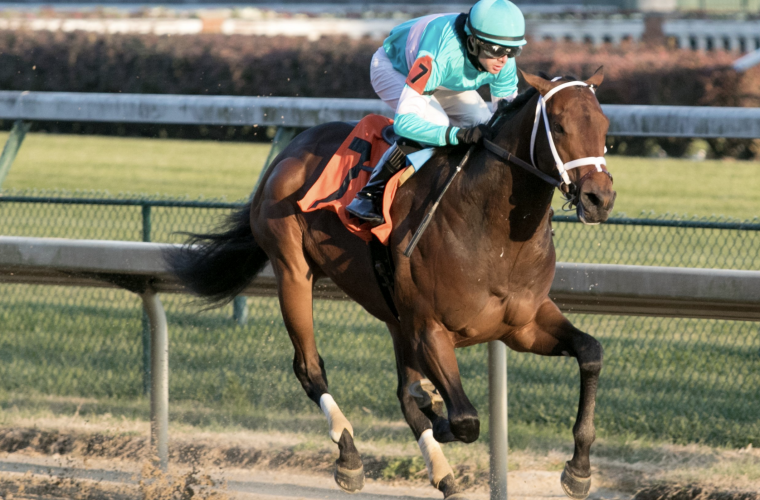 Mr. Monomoy (Palace Malice), a half-brother to champion Monomoy Girl (Tapizar), earned the ‘TDN Rising Star’ moniker with an impressive graduation at Churchill Downs Saturday. Rallying from last to be fourth in his six-panel unveiling at Keeneland Oct. 19, the €180,000 ARQMAY juvenile buy was hammered down to 4-5 favoritism to improve this time around. With Florent Geroux, who piloted his sister to a series of Grade I victories, in the irons, Mr. Monomoy hustled out of the gate to seize the early advantage, doling out early fractions of :22.91 and :46.68 with a pair of rivals breathing down his neck. Showing the way into the lane, the bay powered clear of his foes under a hand ride to win for fun. He is the 15th winner for his freshman sire (by Curlin) and the second of the day at Churchill, following Maga Suite (Palace Malice), who won race four.

The winner’s half-sister Monomoy Girl, (Ch. 3yo filly & MGISW, $2,954,750), who hails from the same barn and shares some of the same owners as her younger sibling, ran the table in the 3-year-old filly division last year with five Grade I wins, including the GI Breeders’ Cup Distaff and GI Kentucky Oaks. She did not make the races this year due to minor illness and injury, but her connections plan to race her in 2020 at age five.

“I woke up to an email from Nic saying that Monomoy Girl’s brother was in the Arqana Breeze Up Sale and breezed good and he thought the horse could make a dirt horse,” Bradley Weisbord of BSW Bloodstock said.

“I actually asked him, ‘What do you know about dirt horses?’ Considering we’ve been so successful with him buying [MGISWs] A Raving Beauty (Ger) and [GI TVG Breeders’ Cup Mile heroine] Uni (GB). He said this horse moves like a dirt horse. I immediately brought it to Sol [Kumin], who is the majority partner on Monomoy Girl. Sol and Mike [Dubb] are super game, a big fan of Nic and supportive of everything we do.” 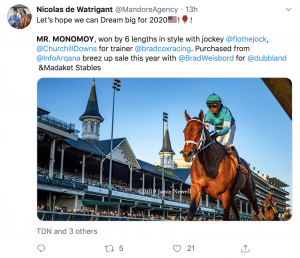 Weisbord concluded, “It’s really fun to have a 2-year-old colt to dream with now.”

Purchased by Michael Hernon’s Highfield Ranch for $75,000 at the 2014 Keeneland November Sale while pregnant with Monomoy Girl, Drumette summoned $1.85 million from Bridlewood Farm at the culmination of her daughter’s Eclipse-worthy campaign at the 2018 Fasig-Tipton November Sale. She was carrying a foal by Mastery at the time and she produced that filly Apr. 11 of this year. The 11-year-old mare was bred back to Tapit. 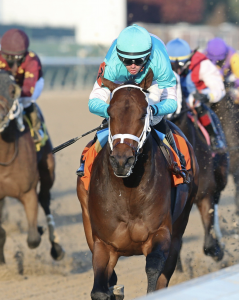