BSW, Crow On The Board at Tatts 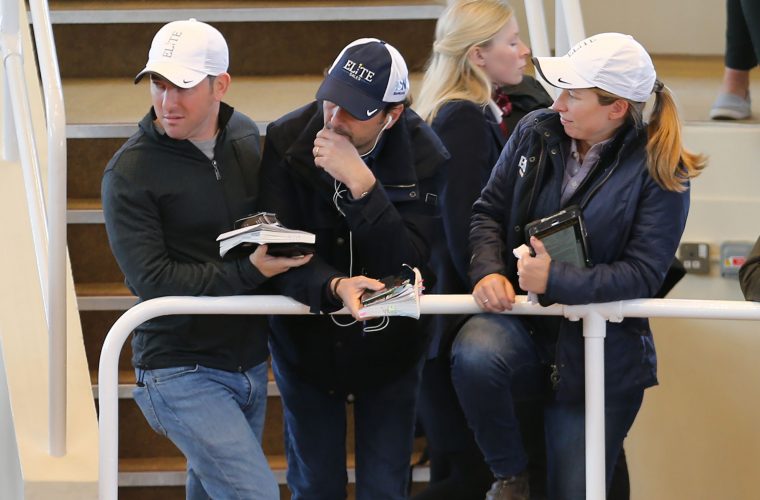 NEWMARKET, UK–On the one hand, their advent in Newmarket this week represented an entirely new venture in the diversifying portfolio of Bradley Weisbord and Liz Crow. On the other, both partners see a seamless efficiency between the things that have worked for BSW Bloodstock in the U.S., through Crow’s domestic selection of young stock, and the novel challenge of the Tattersalls October Sale.

Because Crow has made her name in their homeland, at an accessible level of the market, by focusing on physicals and treating pedigrees just as a guide to cost. To that extent, she even views a lack of familiarity with European bloodlines as a potential advantage.

“To be totally honest, I don’t know a lot of these stallions that well,” she admits. “But I actually think that’s really good, because I’m not biased. I’m just going in looking for a physical I really like, which is what I’ve done most of my career. I’ve kind of made a living off bad sires, or at least what people in the commercial market assume are bad sires.”

The duo’s opening salvo, on behalf of a syndicate put together especially for this experiment, contributed to a conspicuous broadening of American investment during Book 1. BSW Euro Venture/Liz Crow signed for five yearlings during Book 1, beginning with a daughter of Acclamation (GB) (lot 58) at a cost of 70,000gns. On day three they signaled their intentions by picking up the first filly through the ring, a 90,000gns daughter of Muhaarar (GB) (lot 369), and they rounded out the session with a filly by Sea The Moon (Ger) for 110,000gns (lot 428); a 280,000gns Lope de Vega (Ire) filly (lot 432); and a daughter of Zoffany (Ire) for 270,000gns (lot 486) 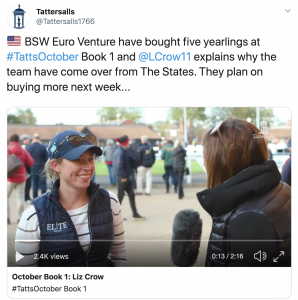 As Weisbord acknowledged, the trailblazers of the Tattersalls to America path have been the likes of Peter Brant and Klaravich Stables; and Chad Brown, trainer of Newspaperofrecord (Ire) (Lope De Vega {Ire}) among others. But he can himself testify to the transferability of European blood to the American theatre, having partnered with Nicolas de Watrigant to import older horses already in training–Uni (More Than Ready), a Grade I winner last Saturday, being the latest to vindicate that strategy.

So the purpose of this latest enterprise is to get into the market at an earlier and less expensive stage of the cycle, banking on the eye that found champion Monomoy Girl (Tapizar) for just $100,000.

“With Liz’s success, buying both grass and dirt horses, this was a pretty easy fit,” Weisbord explains. “When Liz started in 2015, I wasn’t buying many unproven horses: weanlings, yearlings, 2-year-olds. I was focusing generally on private horses, stallion syndication and racehorse management. She’d been honing her eye over the previous years and said: ‘I can do this, we just need to find the clients.’ So we put together a group and in the first year she came up with a champion. Some people could say: ‘One time, you can get lucky.’ But she’s backed it up virtually every sale she has shopped at. These horses have limited to no pedigree, they cost $40,000-$100,000. There’s no longer luck involved. That’s given us confidence, so a few months ago I said: ‘Hey, why don’t we go to Tatts and buy some yearlings for grass, because these horses we’re buying privately are now costing so much money.”

The obvious question for Crow is how she might be altering her specifications, given the different demands awaiting yearlings exported from here over the next couple of weeks.

“I’m trying to find a physical that can stand up to dirt training and tight turns,” she explains. “If they’re going to have to do that every day, they’ve got to be pretty correct in their knees, and not too upright, with enough bone. Some of the physicals here wouldn’t be able to withstand the training in America, so I’m eliminating those right away. But actually I’ve been impressed with a lot of them, I’ve seen a lot more quality here than you see with most of our turf stallions.

“Our clients in America want to win dirt races for the most part, and [for those types] you’re still searching for the same quality here. But turf racing is really expanding in the U.S., with the [Turf Trinity and Turf Tiara] and a lot more money on turf than even three or four years ago. And we don’t have many very good turf sires.”

She and Weisbord naturally exempt Kitten’s Joy, albeit even he has struggled to match his stock’s terrific record on the track as a sales sire. And Weisbord notes that even a turf runner as outstanding as Bricks And Mortar (Giant’s Causeway) will be emigrating to Japan for his stud career. (Shadai Farm’s acquisition of breeding rights was reported in August.)

“Close to half the money in America, in races for $50,000 or more, is now on the turf,” he remarks. “The breeding people are behind on this measure. If we can’t retain a horse like Bricks And Mortar, with some dirt breeding, that’s embarrassing. So we’ve come here to find the best turf pedigrees we can.”

Weisbord is also scouting a niche in the local market, in that he won’t be contesting precocious types. “We’re not looking for Royal Ascot 2-year-olds,” he stresses. “The money for turf horses in the U.S. is long, it’s a mile plus.”

Crow had been heartened, before the sale, to find that her shortlist was not landing her on the obvious sires or families.

“I’ve enjoyed it a lot, especially being so ahead of the curve timing-wise,” she says. “I’ve never turned in a vet list a whole 48 hours before the sale begins. In America they sell 400 a day, there are so many horses shipping in and you’re always so rushed. I am used to moving at a very quick pace. Here I’m so relaxed I’m having tea four times a day.”

Weisbord is candid in his ambition, setting out his stall to become a national leader in sales consignment, and recognizes the value of spreading the BSW brand.

“I think it’s important to get around the world, seeing familiar faces that have been clients, both sellers and buyers,” he says. “So what we’re doing here plays a double role: we can find some runners, and try to branch out. We could be a seller here at Tattersalls, in a year’s time, or in France. Who knows? If we won a good race with something from this group of yearlings, we might return it to the sales grounds. That’s in the back of our minds too.

“Our owners have supported all our new ventures and been successful. They supported Liz, buying yearlings; they supported Elite, selling horses; they’ve supported buying European horses, to race over America. It can always change, but it seems to have great momentum at the moment.”