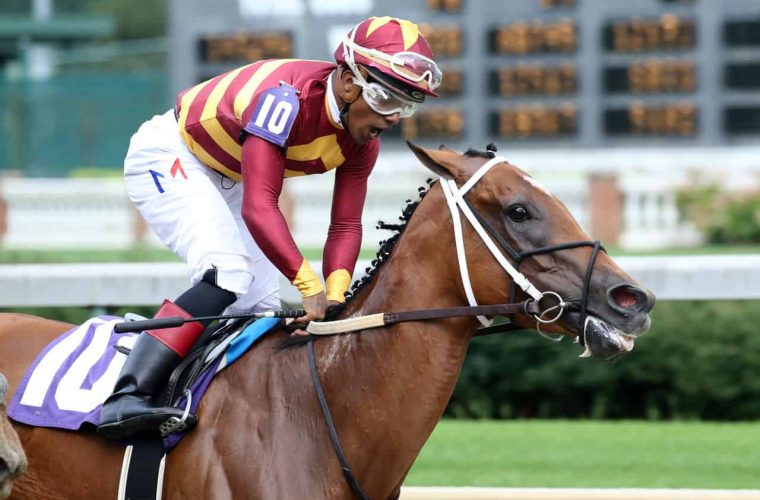 Horse racing may not be considered a team sport, but owner/breeder Scott Heider has a different take on the matter.

About three years ago, after Heider made some key hires for Chartwell Capital, his private equity real estate investment firm, and his philanthropic endeavors, he suddenly found himself with extra time on his hands to spend with his family and focus more on his racing and breeding operations.

He continued to rely on people like John Sikura, the president of Hill ‘n’ Dale Farms, and well-known bloodstock adviser Donato Lanni, but then he extended his circle of trust.

“I have a huge amount of respect for John Sikura. He’s been terrific in helping me make good decisions. He’s as smart of a person as I’ve met in the last 20 years, and I’m fortunate to work with him,” the 56-year-old Heider said. “And Donato has been buying young horses for us for a long time and has been very successful at it.”

But with a goal of becoming more active in the sport, Heider also brought in Tony Lacy of Lacy Bloodstock and Four Star Sales to serve as COO for his equine holdings.

“Tony has been a very, very good hire for us,” the lifelong Nebraska resident said. “I talk about everything with Tony. He’s helped me develop a better understanding of breeding.”

Then, about 18 months ago, Heider turned to Brad Weisbord of BSW Bloodstock to negotiate private sales that boosted the caliber of horses in training under his Heider Family Stables banner.

“Brad has become a very important part of the operation,” Heider said. “He’s given us access to some tremendous fillies.”

Since Heider expanded his team, he’s stressed quality over quantity, and his disciplined approach has allowed him to thrive in recent years as both an owner and breeder, even though he has a relatively modest number of broodmares and runners at the racetrack.

“People ask me what’s changed about my racing operation, and I tell them it’s my confidence level because I have the right team in place,” said Heider, who has also branched out into stallions by buying two shares in Kitten’s Joy  and one in War Front . “Also, I’ve never had more fun in my life.”

Success and fun are often a coupled entry, and Heider’s August adventures at Saratoga vividly illustrate the upswing in his racing and breeding enterprises.

Though he has just six broodmares at Hill ‘n’ Dale and about 24 horses at racetracks in the United States and Europe, he played a prominent role at The Saratoga Sale two weeks ago, selling a homebred Curlin  colt for $950,000 and buying a Tapit  filly for $950,000 during Fasig-Tipton’s sale of select yearlings.

Down the block from the sales pavilion, Heider has two horses he owns in partnerships entered on the Aug. 24 Runhappy Travers Stakes (G1) Day undercard at Saratoga Race Course. Mia Mischief, Heider’s first grade 1 winner in roughly 30 years of owning horses, will be racing in the $500,000 Ketel One Ballerina Stakes (G1), a “Win and You’re In” race for the Breeders’ Cup Filly and Mare Sprint (G1), and Secret Message is entered in the $400,000 Woodford Reserve Ballston Spa Stakes (G2T).

“Scott is a very successful businessman, and he brings his business principles and gut feelings to the equine industry,” Lacy said. “He knows when he sees a good acquisition, but he also has a goal. There’s a destination he wants to reach.”

Key to Heider’s success has been his discipline. He has a relatively simple business philosophy. He buys and races fillies in hopes of turning them into broodmares and sells colts. What takes that approach to the next level is that Heider is committed to acquiring superb talent and latching onto high-quality families and pedigrees, while avoiding the temptation to rely on quantity as a means for success.

Heider’s appreciation for horse racing developed in Nebraska, where he spent days at the now-shuttered Ak-Sar-Ben as a youth, and in California at Santa Anita Parkand Hollywood Park while he attended college at the University of Southern California. After receiving a business degree from USC, he tried to convince his father, Charles, to buy a racehorse.

It took three tries, but Heider’s persistence paid off, and his father bought a share of a Nebraska-bred. That led to an association with trainer Lyman Rollins, whom Heider calls “the Charlie Whittingham of the Midwest.”

The first horse they bought at a sale with Rollins went for $14,000, and Heider wished they had spent more.

He learned a valuable lesson in equine economics through that horse, who turned out to be Answer Do, a champion California-bred sprinter. That $14,000 purchase became a grade 2 winner who won the Hollywood Turf Express Handicap three years in a row (1990-92) and earned nearly $800,000.

“We thought this was going to be a fun sport. My father and I started dipping our toes into it a little deeper and found out how hard it was to find another one like Answer Do, but the racing gods looked favorably on our first purchase at a sale and we became hooked for life,” said Heider, whose father passed away three years ago.

Success became elusive after that, but Heider’s passion for breeding horses as opposed to betting on them began to pay off as he grew older and assembled his team and moved forward with a plan to either tap into or mimic the famed families of farms such as Coolmore’s Jude line, Juddmonte, Claiborne, and the Phipps family.

Matching horses sired by War Front with mares by Galileo, giving them a 3×4 cross with Northern Dancer, is another of his preferred angles.

His participation at the Saratoga sale reflected the scope of his operation. He arrived at the Spa with the singular purpose of selling a Curlin  colt out of the million-dollar earner Taris, whom Heider bought in partnership with Sikura and Craig Bernick following the conclusion of her racing career. The mare died shortly after delivering the Curlin colt.

But while he was in Saratoga, Lanni mentioned a filly by Tapit out of the Seeking the Gold mare Pension who had caught his eye. Then Heider asked trainer Steve Asmussen for his opinion on the great-granddaughter of the fabulous Phipps broodmare Blitey.

“After Donato told me about her, I had Steve Asmussen look at the filly, and it was interesting because both of them in their notes to me used the word ‘special,’ and I thought, I got Donato Lanni and Steve Asmussen, who has trained more Tapits than I think anyone, saying she’s special, so we made a determined run to get her. Blitey, who has been prolific, is the third dam, and this is the kind of filly you hope will have success on the track and we keep long term,” Heider said of the $950,000 purchase.

Meanwhile, the Curlin colt by Taris went for the same $950,000 to trainer Ken McPeek as an agent for Paul Fireman.

“I hope he wins the Kentucky Derby and gets syndicated for $20 million. That’s the way this business is,” Heider said. “You want to put yourself in position to be lucky more often not, and when I sell a horse that someone else does well with, I’m the first person to congratulate them.”

That approach will also be on display at the upcoming Keeneland September Yearling Sale when Heider will offer another colt, this one named Cavallino, a son of Ghostzapper  out of Lacadena, a daughter of Fasliyev whom Heider hopes can be a foundation mare.

“I wish he was a filly so we could keep him,” Heider said, with his discipline rushing to fore. “He’s amazing.”

Heider purchased Lacadena for $1.3 million from the Stone Farm consignment at the 2015 Keeneland November Breeding Stock Sale. Raced by Bobby Flay at the end of her campaign, she’s a daughter of the Sadler’s Wells mare Butterfly Blue, who is a half sister to Better Than Honour, the dam of Belmont Stakes (G1) winners Rags to Riches and Jazil.

Butterfly Blue is also the granddam of America, a grade 3 winner whose son by Curlin fetched a winning bid of $1.5 million this month at Saratoga, matching the highest price at the popular sale.

“Lacadena is bred 3×3 to Northern Dancer, which is tough to find these days,” Heider said about the mare, who is currently in foal to Justify .

Heider also has a promising 2-year-old Lacadena filly by Tapit named Discern, who is in training with Asmussen and is destined to join Heider’s broodmare band at some point in the future, as well as a weanling colt by Curlin.

“Lacadena is from the Better Than Honour family, which is a deep and productive family,” Lacy said. “When you have a pedigree like that, you try to nurture it. You’re trying to help the mare continue to be successful, and with the Tapit filly you are hoping for stakes results with her so you can develop the next generation in the line. It’s a long-term process and everything’s a gamble, but you try to buy the best horses and the best quality and hope you can nurture that line for yourself. Scott is looking for a long-term investment. He’s not looking for a short-term gain. He wants to build something that he can make better over the years.”

On the racing front, of the first six horses Heider bought into through Weisbord, five have become stakes winners.

Aside from Mia Mischief, who won the Eight Belles Stakes Presented by Kentucky Trailer (G2) in her first start for Heider, and Secret Message, a sampling of his stable includes grade 3 winner Elysea’s World; Please Flatter Me; Cairenn; Contributing; Flying the Colors, a War Front filly acquired as a foal from John Magnier through Lanni and Sikura who is one of three horses owned by Heider with the War Front-Galileo cross; and Pista, an American Pharoah  filly out of the Galileo mare Mohini who is with trainer Joseph O’ Brien in Ireland.

“He’s an easy partner to work with,” Weisbord said about Heider. “We’ve been lucky together. He wants stakes fillies and he’s been very amenable. Scott loves the breeding side of it. He takes a lot of pride in his homebreds and raising horses, and he wants to maintain a top broodmare band.”

That Heider is a good partner should come as no surprise. After all, he truly understands the value of teamwork.