SECRET MESSAGE Gets Up for Nassau Stakes Win 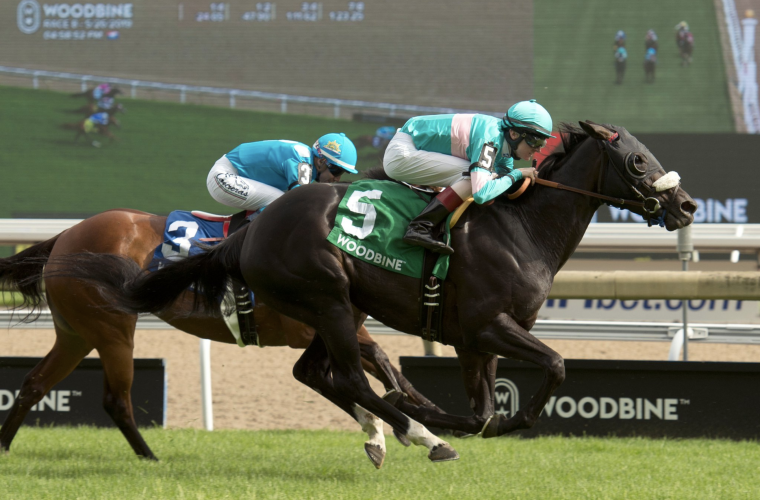 Originally published by the BloodHorse.com.

Madakat Stables, ERJ Racing, Elayne Stable, and Bouchey Thoroughbred Ventures’ Secret Message came through in the final strides of the Nassau Stakes (G2T) May 26 at Woodbine to bring her season record to 2-for-2.

The $175,000 Nassau, featuring older fillies and mares, is the first leg of Woodbine’s new “Ladies of the Lawn” bonus stakes series on the E.P. Taylor Turf Course.

The Hat Trick filly sat well off the pace near the back of the six-horse field under jockey Trevor McCarthy in the one-mile test over yielding turf, while Ghostly Presence went through a half-mile in :24.65 and :47.90. Starship Jubilee, the 4-5 favorite who rated midpack, took over three wide heading into the stretch, posting six furlongs in 1:11.62.

But just as it looked to be locked down by the widening margin of Starship Jubilee, second choice Secret Message kicked into another gear and chased down the leader to win by three-quarters of a length as the pair crossed the wire 5 3/4 lengths ahead of third place Get Explicit. The final time for the distance was 1:35.30.

“The plan was to just let her break and get her to settle,” McCarthy said. “She was pretty sharp today, so I was a little nervous about how good she would break, but she really turned out nice. We got some nice cover. We were able to follow (Starship Jubilee) the whole way around there and get through and get the job done.

“It’s a long stretch—it’s fun. Big sweeping turns so you can save plenty of ground, and you have plenty of time to get through and get the job done.”

It was the second stakes win of the year for the 4-year-old filly trained by Graham Motion. Secret Message won the April 20 Dahlia Stakes at Laurel Park over firm turf by a nose in her season debut.

Last year, Secret Message broke her maiden at Turfway Park in January after finishing off the board in one start as a 2-year-old. Two starts later, she took an allowance race at the same track. She then finished second in the Hilltop Stakes at Pimlico Race Course and won the Pucker Up Stakes (G3T) at Arlington International Racecourse. After finishing second again in Belmont Park‘s Sands Point Stakes (G2T), she closed her season with an off-the-board finish in Keeneland‘s Queen Elizabeth II Challenge Cup Stakes Presented by Lane’s End (G1T).

Bred in Kentucky by Allen Tennenbaum, Secret Message is the second foal and first graded stakes winner out of the Gone West mare Westside Singer.