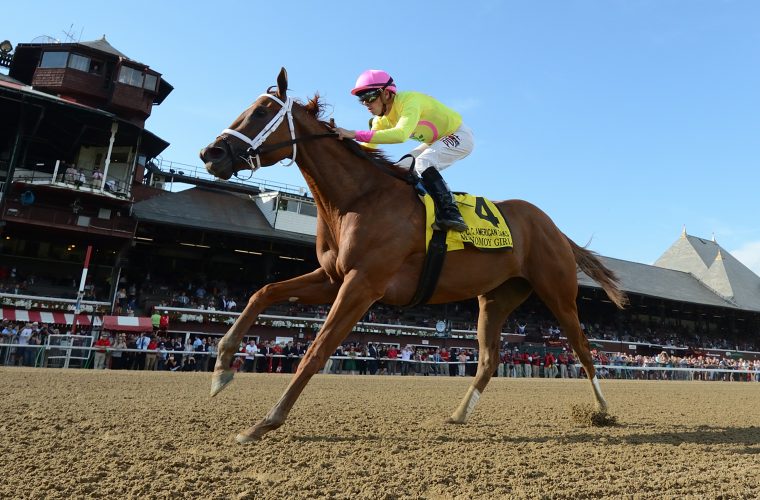 There’s no doubt the 3-year-old championship for the boys—and almost assuredly Horse of the Year, too—was signed, sealed, and delivered June 9 when Justify crossed the finish line in the Belmont Stakes Presented by NYRA Bets (G1) and became the 13th Triple Crown champion.

Now you can pretty much write in July 22 at Saratoga Race Course as the clincher for the 3-year-old fillies’ crown.

The victory was the fifth straight for the daughter of Tapizar , with the last four—the CCA Oaks, Acorn Stakes, Longines Kentucky Oaks, and Central Bank Ashland Stakes—coming in grade 1 races.

Eclipse Award voters will have the ultimate say, but for Monomoy Girl’s connections, it’s game, set, and match after her dominant performance at the Spa.

“I think she locked up the championship,” said Sol Kumin of Monomoy Stables, who owns the multiple grade 1 winner along with Michael Dubb, Stuart Grant of The Elkstone Group, and Mike Caruso of Bethlehem Stables. “I am so proud of her. She’s a special horse. Horses like her only come around once in a lifetime. I’m so happy for (trainer Brad Cox) and everyone else.”

“Whatever happens from here, I think she won the championship,” he said. “There were some doubters, but Brad wasn’t one of them.”

“How could you doubt her?” Grant chipped in. “She’s overcome everything. She overcame post 14 in the Oaks. She’s won on top. She’s won stalking. She won from all the way behind. She’s showed you how versatile she is. She’s just a great filly.”

Kumin had an even more powerful hand than his partners in the CCA Oaks as he bought a share of Midnight Bisou from Jeff Bloom of Bloom Racing Stable and Allen Racing after the filly finished third in the Kentucky Oaks. He did not expect the two fillies to meet at Saratoga, but he came away from the matchup savoring a happy ending.

“She’s the one (I rooted for),” Kumin said about Monomoy Girl. “It was an awkward spot to be in before the race. The other filly was doing really well, but Monomoy Girl is a special horse. I couldn’t be happier with the way it turned out.”

What’s next for Monomoy Girl on the path to a year-end date in the Longines Breeders’ Cup Distaff (G1) and an expected 4-year-old campaign is still up in the air. The Aug.18 Alabama Stakes (G1) at Saratoga and the Sept. 22 Cotillion Stakes (G1) at Parx Racing are the top options, and while Cox is not settled on a plan, there are strong indications Monomoy Girl will skip the $600,000 Alabama at 1 1/4 miles in favor of the $1 million Cotillion at 1 1/16 miles and run only once before the Breeders’ Cup.

“Today answered some questions for us. A mile and an eighth is not an issue for her,” Cox said. “A mile and a quarter is something she will never have to do unless we run in the Breeders’ Cup Classic (G1), so it’s kind of like, why do it? We’ll see.”

“It’s Brad call, but it’s my guess it’s Cotillion and then Breeders’ Cup Distaff and then give her a rest and bring her back at 4,” he said.

Facing boys could be a possibility, especially if the powers that be at Parx get a little creative with the purse for the Pennsylvania Derby (G1), also on Sept. 22.

“If there was a great purse differential between the Pennsylvania Derby and the Cotillion, we’d think about it,” Dubb said, “but’s it’s the same million dollars.”

“Now,” Grant said, “if you want to convince the folks at Parx to chip in an extra half-million to get her to run against the boys, we’ll talk about it.”

Speaking of boys, with long-range forecasts calling for severe weather at Saratoga on race day, Kumin said there was a group discussion about the possibility of scratching Monomoy Girl if the track turned out to be a sea of goo and target males in the betfair.com Haskell Invitational (G1) at Monmouth Park. But in the end, the weather forecasters were wrong as the skies were sunny and the track was fast for the CCA Oaks.

“We talked today that if the weather turned out to be really bad, we would scratch and look at the Haskell,” Kumin said. “But the weather cooperated, we stuck to the plan, and it worked out perfectly, which is a rare thing to happen.”