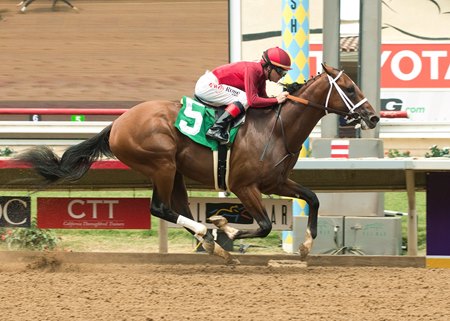 Article originally written by Jay Privman of DRF.com on July 18, 2018.

DEL MAR, Calif. – Tatters to Riches was one of the most-exciting 2-year-old prospects on this circuit last summer, but went to the sidelines last fall with a chip in a hind ankle. He is just about set to return for trainer Jeff Mullins, who has high hopes for the 3-year-old colt.

“He’s ready,” said Mullins, who trains Tatters to Riches for the Cohen family’s Red Baron’s Barn. “It’s stressful getting him back because we know how much talent he has.”

Tatters to Riches, by Union Rags, was purchased as a 2-year-old in training for $1 million. He won his debut last summer at Del Mar, but has not raced since finishing sixth in the Del Mar Futurity.