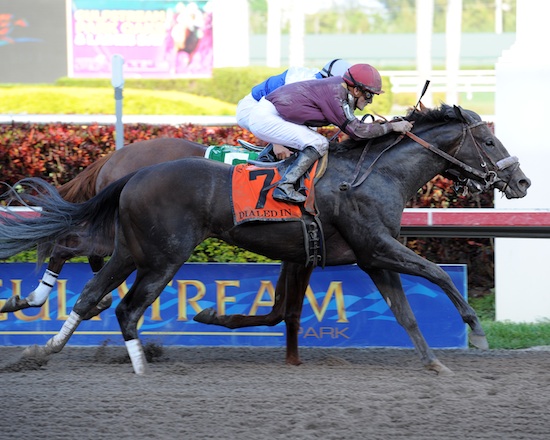 Freshman sire Dialed In is off to an exceptional start at stud leading the pack right now. From 15 starters he has had five winners, two black-type winners, and one Graded Stake winner.

Before Gunnevera (Dialed In) won the (G2) Saratoga Special on August 14th BSW Bloodstock purchased two shares in the son of Mineshaft. This turned out to be a very timely purchase as he took the lead over Mission Impazible, Creative Cause, and Stay Thirsty as the leading freshman sire shortly thereafter. The shares were purchased after seeing several nice yearlings and two-year-olds by the sire and a promising start by several of his offspring.

Gunnevera (Dialed In) caught Recruiting Ready in the final strides of the G2 Saratoga Special on Sunday, representing his sire with the first Graded win for the 2016 freshman sire class. This was Dialed In’s second Stakes Winner.

Click here to read more on the exceptional start for Dialed In.

Dialed In stands for $7,500 at Darby Dan Farm in Lexington, Kentucky.